“I will say a word on Turkey… which remains a candidate country, a key partner and a strategically important neighbour for the European Union, also given its proximity to a very volatile Middle East, whose stability is a key priority for both of us. The Turkish government states its commitment to European Union accession but we see the country continues to move further away from the European Union” EU top diplomat Federica Mogherini said, addressing Brussels press corps.

Read the full remarks by @FedericaMog at the joint press conference on the adoption of the 2019 Enlargement Package https://t.co/c4oOCdJSL9

“We believe it would be beneficial for all and in particular for the Turkish citizens if this trend is reversed urgently, which we will obviously always welcome.”

“We also emphasize the importance of good neighbourly relations and avoiding tensions in the Eastern Mediterranean, and you have seen my recent statements in particular on this issue.”

There are widespread allegations that a hundred of ex-Turkish Diplomats are being tortured in Ankara, under police custody. Torture is crime against humanity and must stop immediately! @amnestypress @amnesty @hrw @UN @FreefromTorture @BBCWorld
#StopTorturingDiplomats 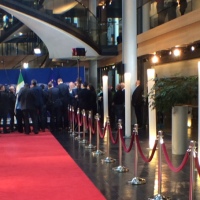